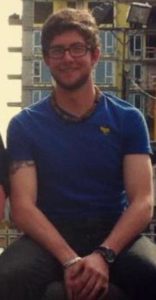 The Codiac Regional RCMP is seeking the public’s help to locate a missing 25-year-old Moncton man.

Stephane Leandre Leger was last seen in the Robinson Court area of downtown Moncton on November 20, 2016, at about 1:00 a.m. It is unusual for him to be out of contact with his family.

He is described as Caucasian, measuring approximately 6-feet tall and weighing about 210 lbs. He has dark hair that is shaved on the sides and longer on the top, brown eyes, and a goatee. He has a tattoo on his right bicep that says “Leger”, as well as a tattoo on his chest and one on his calf. He was last seen wearing black pants, a blue shirt and a black vest.

Anyone with information on the whereabouts of Stephane Leandre Leger, or who may have seen him since November 20 is asked to contact the Codiac RCMP at 506-857-2400.